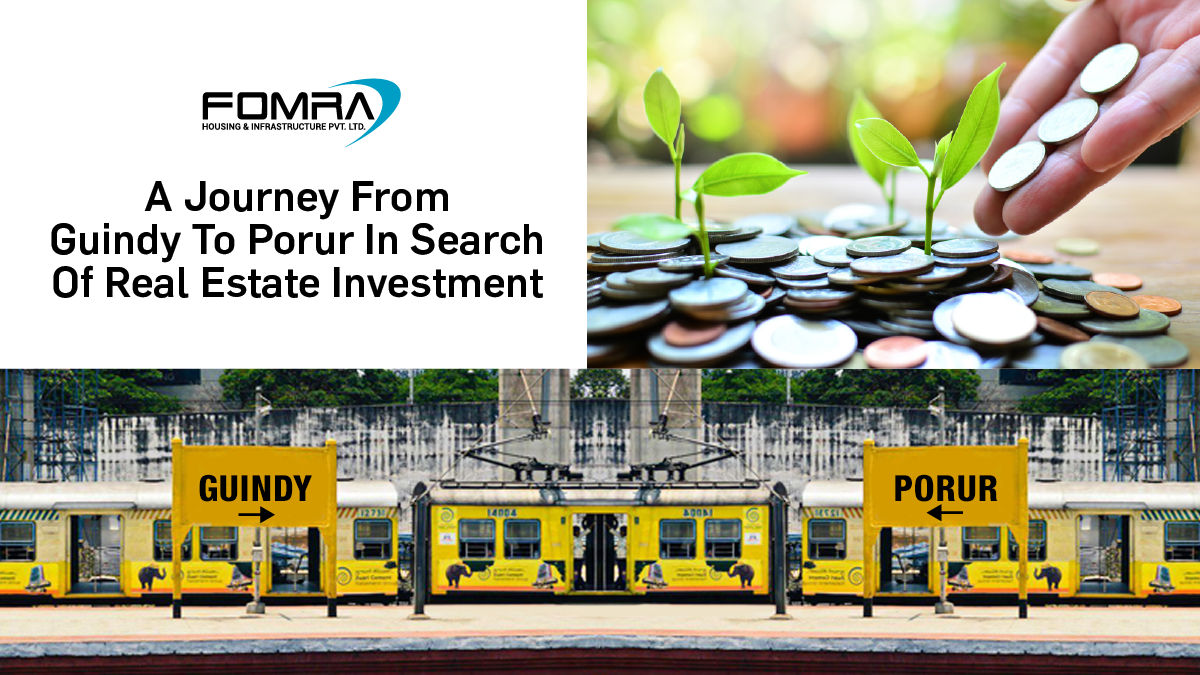 A well-connected and amply popular suburb in West Chennai, Porur has been gaining considerable popularity as the right place for real estate investment in Chennai. The metropolitan city of Chennai has been developing rapidly. With the Smart City plans and the extension of Chennai’s city limits, increased demand for housing is being witnessed in the city.

Porur is one neighborhood here that while being free from the hustle and bustle of the city still manages to offer all the charms of urban life. In tune with the rising demand for residential properties in this part of the city, apartment builders offer a range of new flats for sale in Porur.

Are you looking for the best place for real estate investment from Guindy to Porur?

Porur is blessed with a multi-faceted development. In addition to housing several existing industries and residential colonies, Porur has been rapidly emerging as an IT hub of the city. An increasing number of business organizations prefer this location today, thanks to the multitude of benefits available exclusively in this locality. When you traverse the city from Guindy toward Porur, you can still find idyllic places to create comfortable and all-inclusive condominiums.

In addition to the massive DLF IT Park, several others are on the anvil in this neighborhood. The Raheja IT Park with 1.1 million square feet capacity, ASV IT Park having ample facilities and space, and the RMZ IT ark with 1.7 million square feet is the next in line to decorate the Porur skyline within the next few years. This will naturally generate about 53,000 jobs in the near future. There’s little wonder that developers throng to acquire properties in and around Porur. Aspiring homeowners will find Porur to be the right place for real estate investment in the city.

Of late, Porur and the areas included in it have been witnessing massive development and a number of renowned developers have started their projects, offering new flats for sale in Porur in the affordable price range.

Not just the ample employment opportunities and the hassle-free living conditions, Porur is blessed with the presence of acclaimed and famous educational institutions as well, the Ramachandra Medical College and Meenakshi Ammal Dental College being a few.

With excellent road and rail network in place, and metro rail project about to be launched, new flats for sale in Porur are highly in demand. This locality boasts of great social infrastructure. This satiates one of the major requirements of modern homebuyers. Moreover, it has a lot of reputed schools, eateries, health care facilities, shopping centres, and recreational centres.

The residential apartments in the neighborhoods located between Guindy and Porur, namely, Nandampakkam and Ramavaram, are enriched with all conceivable amenities and facilities that fulfill the needs of the residents.

One of the prominent landmarks of Chennai is the Guindy industrial estate. It is not only home to countless industries that offer numerous hot employment opportunities but also hold the promise to develop in a multi-faceted manner in the future. It is close to Porur, there is going to be unprecedented and perennial hunger for residential properties, especially 2 and 3 BHK flats for sale in Porur. The major advantage is that Porur is easy to reach from Guindy.

Located within 5 km from Guindy and 6 km from Porur, the Chennai Trade Center is a majestic exhibition complex in Nandambakkam. It hosts conventions and trade fairs throughout the year. This fair infrastructure developed by India Trade Promotion Organization is a noteworthy landmark of the city and it helps display various products and promote them. Mostly engaged, this is a star attraction from the real estate perspective.

The broad four-lane Porur flyover that was opened for traffic during 2017 has considerably reduced the erstwhile traffic congestion at the Arcot Road and Mount Poonamalle road junction. One of the most crucial and often traffic-congested Porur junction has been rendered easy to move about, thanks to this bridge. Traffic at this junction that caters to the needs of over 1,30,000 vehicles has been greatly streamlined and made smooth now.

The Phase-II, Corridor-4 plan has identified Porur junction as one of the stations. This is expected to facilitate easy handling of the voluminous future traffic while cutting down the time for travelling to and from Porur from the various other parts of the city. This will naturally translate to a very high increase in property value in and around Porur.

The current and future real estate position in Porur

Porur locality assures a good return on investment as far as residential properties are concerned. Proximity to IT parks and special economic zones warrants attracting migrating population from various parts. Affordable pricing is another driving factor for people to invest in new flats for sale in Porur.

The rental value as of date ranges from Rs. 8,000/- to Rs. 30,000/- depending on the type of the apartment. Especially, 3 BHK flats for sale in Porur command good rental as well as a resale value here. Factors such as increasing demand, lucrative opportunities, and newly-introduced real estate Acts are expected to enhance the value of properties in the future.

With land parcels having exhausted in the core city areas, and the rapid growth of suburbs, it is evident that localities such as Porur are going to witness great progress in the future. Porur proves to be a safe and promising bet for those who look for real estate investment in Chennai.

Is it worth buying a flat in Porur and Iyyappanthangal?

Yes, Porur & Iyyappanthagal are one of the core hotspot places in Chennai with a lot of potential benefits for quality living. They are centrally located between Guindy and Poonamallee, offering a good work-life balance while providing an easy commute.

Why should one choose 3 bhk flats for sale in Porur?

3 BHK flats in Porur offer spacious living at budget prices in Chennai with all luxury amenities nearby. Buying a new apartment nearer to an industrial area like Guindy is a wise investment plan for the future.

What is the best place to invest in Chennai in 2020?

There are a number of locations in Chennai that are prime areas for real estate investment. When considering the overall benefits, however, including future improvements, better ROI and property price, Porur is the right place for investment in Chennai in 2020.